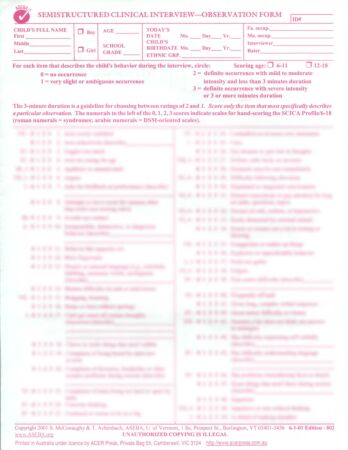 The ASEBA Semi-structured Clinical Interview for Children and Adolescents (SCICA) for 6-18 year olds maximises the value of interviews with a flexible user-friendly protocol, plus forms on which interviewers rate their observations and children's self-reports during the interview.

It includes instructions, a protocol of questions and probes, observation and self-report forms for rating what the child does and says during the interview, and profiles for scoring ratings. The forms are scorable by the interviewer or observers.

The SCICA Combined Observation & Self-Report Form is scored immediately after the SCICA has been completed.

These Forms may be scored by hand or using the Scoring Software.

• Masters degree in Psychology, OR evidence of equivalent level of study.