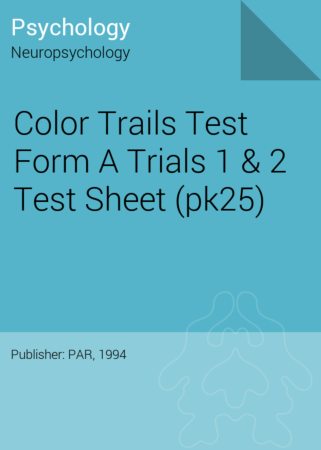 The Color Trails Test (CTT) assesses sustained attention in adults, and was developed to be free from the influence of language and cultural bias.

The CTT retains the sensitivity and specificity of the original Trail Making Test (TMT) but substitutes color for letters, making it more suitable in cross-cultural and special needs contexts. Instructions may be presented either verbally or with visual cues.

The Color Trails Test Form A Trials 1 & 2 Test Sheet contains both the Form A Trial 1 and 2. A practice trial on one side, and the test trial on the opposite side.

For Trial 1, the respondent is instructed to rapidly draw a line connecting the circles numbered 1-25 in consecutive order (the respondent would have completed the practice trial prior) as quickly as they can. The examiner will record near misses, errors and the number of prompts on the Record Form.

For Trial 2, the respondent is instructed to rapidly draw a line between numbered circles, maintaining the sequence, but alternating between pink and yellow colours. For example, draw a line from Pink 1 to Yellow 2 (avoiding Pink 2). The respondent would have completed the practice trial prior. The examiner will record the number of near misses, prompts, colour sequence errors and number sequence errors made by the respondent.

A provisional psychologist with: