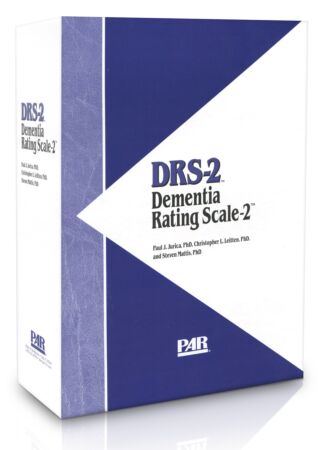 Purpose: To measure cognitive functioning in adults with cognitive impairment

The Dementia Rating Scale–2 (DRS-2) assesses a patient’s overall level of cognitive functioning, and can be used to track changes in cognitive status over time. The DRS-2 measures deficits in a large range of higher cortical functions and differentiates deficits of varying severity levels.

The DRS-2 is useful in the assessment and progression of dementia of Alzheimer's type, vascular dementia, Parkinson's disease, Huntington's disease, and age-related dementia in mental retardation and Down's syndrome.

The DRS-2 yields an overall level of cognitive functioning and five subscale scores, which provide additional information on specific abilities:

Within each subscale, the most difficult tasks are presented first. If the first one or two tasks in a subscale are performed well, subsequent tasks in the subscale are credited with a correct performance and the examiner proceeds to the next subscale—a procedure that significantly shortens the total testing time.

The DRS-2 Interpretive Report is now available on PARiConnect. Interpretive reports provide scores, profiles, and interpretive text based on response data from a paper-and-pencil assessment.

A provisional psychologist with: