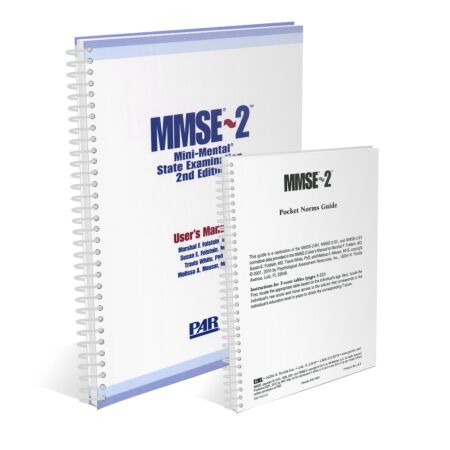 A new standard version that is equivalent to the original MMSE and new brief and expanded forms, the MMSE-2 retains clinical utility and efficiency while expanding its usefulness in populations with milder forms of cognitive impairment, including subcortical dementia, and the effects of aging.

The MMSE-2 is ideal for objectively documenting a client’s mental state and can be used for routine and repeated assessment of cognitive function.

While the structure and scoring of the original 30-point MMSE remain, problematic items were replaced and several tasks were modified to adjust difficulty level. Because the overall difficulty and raw score range remain the same as in the original, MMSE-2:SV scores and MMSE scores are comparable.

Composed entirely of the Registration, Orientation to Time, Orientation to Place, and Recall tasks, the 16-point MMSE-2:BV can be used for clinical or research situations that call for a rapid cognitive screener and requires no stimuli for administration.

The 90-point MMSE-2:EV is more sensitive to subcortical dementia and to changes associated with aging; it is sufficiently difficult that it does not have a ceiling effect. Two new tasks (Story Memory and Processing Speed) have been added.

• Masters degree in Psychology, OR evidence of equivalent level of study.