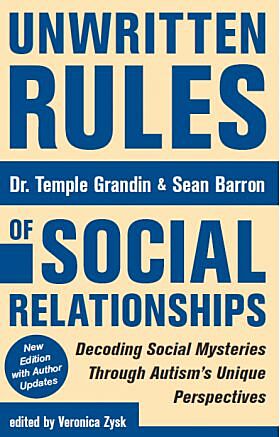 Decoding Social Mysteries through the Unique Perspectives of Autism

Whether you are a person with autism, a caregiver in the autism community, or just someone interested in an "outsider" view of society, the author's powerful stories in Unwritten Rules of Social Relationships will enthral and enlighten you.

Often those with Autism suffer socially and professionally because social cues and perceptions hinder their lives. This enlightening and thought provoking book educates both those on the spectrum and their caregivers.

Both born with autism, the two authors now famously live successful social lives, but their paths were very different.

Sean's emotions controlled his social behaviour. Baffled by social rules, isolated and friendless, he made up his own, and applied them to others. When they inevitably broke his rules, he felt worthless and unloved.

Both Temple and Sean ultimately came to terms with the social world and found their places in it.

This revised edition with Author updates was published in April 2017 in honour of Autism Awareness Month.

Dr Temple Grandin is one of the world's most accomplished and well known adults with autism. Diagnosed with autism as a child, she went on to complete her PhD in animal science from the University of Illinois and is now a professor at Colorado State University. She is the author of six books, including the bestsellers Unwritten Rules of Social Relationships, Thinking in Pictures: My Life with Autism, and The Way I See It.