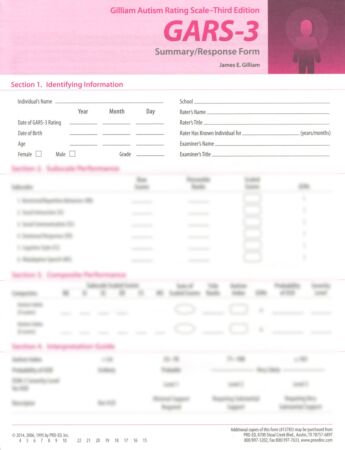 Items on the GARS-3 (44 of which are new to the 3rd ed.) are based on the 2013 diagnostic criteria for Autism Spectrum Disorder adopted by the APA and published in the Diagnostic and Statistical Manual of Mental Disorders-Fifth Edition (DSM-5).

The GARS-3 Summary/Response Form provides the space to record the individual's demographic details, the rater responses, the raw scores, standard scores, percentile ranks and information related to the diagnosis of Autism Spectrum Disorder.