Skip to the end of the images gallery
New 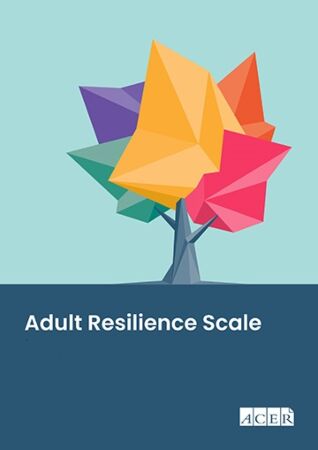 The Adult Resilience Scale assesses dimensions of resilience in individuals, and provides a framework for developing resilience skills and capabilities.

"Resilience is the ability to adapt to the changing environment and bounce back from adversity and personal setbacks."

Many people have encountered an adverse experience at some point in their lives. Yet, some bounce back quickly while others endure the difficulties of adjusting for a longer period. A distinguishing factor between these people is their level of resilience.

Resilience has been widely defined as the ability to adapt to the changing environment and to recover from adversity and personal setbacks. Resilience has also been expressed as a competency or skill, embodying the personal qualities of individuals who thrive in difficult circumstances. Research suggests that resilient people adapt more successfully in response to major life events and traumatic experiences

The Adult Resilience Scale has been developed to provide an understanding of the concept of resilience, and measures the five dimensions of:

The Adult Resilience Scale suite includes a Manual as well as a Coach and Client Report.

The Adult Resilience Scale was developed to provide a tool to measure resilience in individuals.

Based on extensive research from military and civilian operational occupations, the Adult Resilience Scale utilised a large international database. There was significant item analysis and review, resulting in a 75-item scale measuring the Five Dimensions of Threat Perception, Adjustment, Decision Making, Coping and Recovery. The Adult Resilience Scale assesses these dimensions in individuals, and provides a framework for developing resilience skills and capabilities.

As a soldier, military psychologist and firefighter for over twenty years, resilience played a major role in the work of the author, Denis Flores. Formal research and alignment with the International Military Psychology Symposium (IAMPS) led to an invitation to be a keynote speaker at the 44th IAMPS in St Petersburg, Russia in 2008, on Testing for Situational Awareness in the Military, and in the following year to a presentation to the 45th Symposium in Latvia, entitled, Resilience, Enhancing Military Performance and Safety.

The original concept of a resilience assessment was developed and presented at the latter conference in Latvia. Five Dimensions were proposed: Threat Perception, Decision Making, Adjustment, Coping and Recovery. The Adult Resilience Scale pays particular attention to Threat Perception, as it provides a context for the candidate’s overall behaviour and emotions. This is because people can be resilient in some situations but not in others, making the Adult Resilience Scale particularly robust.

The original understanding of resilience comes from physics and is defined as, ‘The quantity of work given back by a body that is compressed to a certain limit and then allowed freely to recover its former size or shape’ (Funk & Wagnells, 1958). In human terms, it can be described as the act or power of springing back to a former position or state. For the purposes of the Adult Resilience Scale, resilience is defined as, ‘The ability to adapt to the changing environment and bounce back from adversity and personal setbacks’. In clinical and psychiatric contexts, resilience has also been recognised as a measure of stress coping ability. The importance of resilience as a construct goes back many years but came to greater relevance in organisational psychology through the military, with armies throughout the world developing resilience training. Resilience has also been expressed as competence because it embodies the personal qualities that enable individuals to thrive in difficult circumstances. It is a different construct to personality, but our research suggests that resilient people adapt more successfully in response to major life events and traumatic experiences.

Denis Flores has a long and distinguished history in the field of psychology in Australia and Malta, with active involvement in research, practice and presenting as a keynote speaker at numerous conferences.

In 1993, after 20 years as a military psychologist and subsequent work for two of the big six consulting firms, Denis Flores founded his own firm, Career Focus Pty Ltd, offering services in psychological assessment, organisation development, executive coaching and career transition.

With a keen interest in the next generation of psychologists, Denis also established the Institute of Psychological Practice (IPP) in 2003, providing curriculum and supervision for psychology graduate interns. IPP provided professional development leading to a Diploma of Psychological Practice and high level practice learning for already registered psychologists. Denis was Principal and Chair of the Board of Governors of the institute from 2004 to 2007.