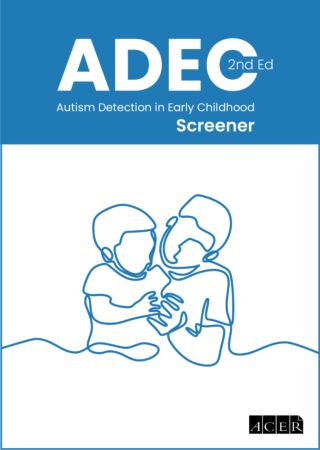 The Autism Detection in Early Childhood (ADEC) 2nd Edition enables early detection of ASD or autistic tendencies and can enable much-needed support at an early stage of development.

The ADEC can be administered in one of two ways:

Upon completion of the screener, administrators will receive an online report outlining the likelihood of ASD in the child screened and the suggested follow-up, including potential further screening and a referral for a more formal diagnosis. This allows for much-needed support at an early stage of development, which is a contributor to successful intervention.

Online scoring and reporting for the ADEC 2nd Edition will be available on the ACER Psych Testing Platform, which offers:

Robyn Young's interest in autism spectrum disorder (ASD) began while studying for her PhD in Savant Syndrome. This work became the subject of an ABC documentary, Uncommon Genius. She went on to develop both the first and second editions of the Autism Detection in Early Childhood screener (Young, 2007; Young, Brewer, Nah & Lim, 2022), which clearly operationalise early behaviours indicative of ASD. Robyn has further collaborated with her colleagues at Flinders University to develop the SPECTRA intervention program (Young, Partington & Goren, 2009). She has also published a book on preparing autistic children for school Ready, Set, Learn! (Moffat & Young, 2017).

Neil Brewer’s PhD and early research career focused on cognitive processing deficits associated with intellectual disability, and he taught predominantly on psychological assessment and cognition and learning in association with intellectual disability. Although in the latter half of his career his main focus has been in the area of forensic psychology, he has maintained an ongoing research program concerned with various aspects of ASD, including early detection in young children and the relationship between social-cognitive difficulties and criminal vulnerability in adults.

Yong-Hwee is an Educational Psychologist and an Assistant Professor at the National Institute of Education, Nanyang Technological University, Singapore. He has more than two decades of working experience in special educational needs, having worked in special schools as a school psychologist, in a hospital’s paediatric clinic as a senior psychologist and as a consultant psychologist in various private clinics. He specialises in the identification of ASD and both his research and clinical interests lie in the early detection of ASD in young children, as well as understanding and supporting individuals with ASD across their lifespan.

Alliyza Lim has an interest in applied research that aims to improve the wellbeing of people on the autism spectrum. Her PhD research focused on understanding perceptions of individuals with ASD in the criminal justice system. In addition to investigating the early detection of ASD in young children, she is also involved in research on how ASD may co-occur with other mental health conditions such as PTSD and eating disorders.