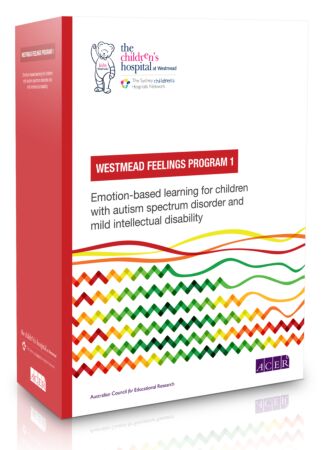 Westmead Feelings Program 1 is aimed at autistic verbal children, who may or may not read, can draw simple pictures or write a few key words and can pay attention for at least a few minutes at a time.

Telehealth Support Materials are only available to Westmead Feelings Program Facilitators.
If you have purchased the program or completed the course in the past and have trouble accessing those resources, please send an email to sales@acer.org.

Facilitator introduces children to four primary emotions – happy, sad, worried and angry – and explains that there are different intensities of feelings. Children learn this concept with help of the Feelings Strength Bar.

Module 1 for parents and teachers

Facilitator works closely with parents and teachers to ensure the best possible outcome for each child. Parents and teachers are introduced to their role as ‘emotion coaches’, and learn about how to support children to talk about their emotions.

Children learn about feelings in themselves and in others, to foster a greater understanding of the causes of and influences on people’s emotional experiences and behaviour. They also learn specifically tailored cognitive-behavioural therapy strategies.

Module 2 for parents and teachers

Parents and teachers continue to fine-tune their emotion-coaching skills, and learn about problem solving and perspective taking.

Children learn a range of strategies for dealing with difficult or unpleasant emotions to feel more in control and accepting of their emotions, enabling them to react more appropriately and in more socially positive ways.

Module 3 for parents and teachers

Parents and teachers learn ways by which they can support children's emotions management skills.

The Boosters comprise one session each for children, teachers and parents approximately six months after completion of Module 3.

10 years of research and clinical trials

Emotional competence is the foundation for social skills and good mental health. The Westmead Feelings Program is derived from specialist clinical experience of what works, based on theories of emotional intelligence and emotional competence, and has been developed to suit children’s individual learning needs. To date, the largest and most significant study of WFP involved a treatment-versus-control-group study that evaluated the impact of the program on the emotional competence of children with autism spectrum disorder (ASD). In this study, 55 school counsellors from government schools in New South Wales, Australia were trained and certified as WFP 1 and WFP 2 facilitators and delivered the program to over 330 children on the autism spectrum (with and without mild intellectual disability) and their families and teachers. Comparing treatment to control groups, there were significant improvements in the emotional competence of children with ASD mild ID following delivery of WFP 1 as reported by teachers. These improvements were maintained six months after treatment and the effect sizes were large (Ratcliffe, Wong, Dossetor & Hayes, 2014).

An evaluation of WFP 1 for children on the autism spectrum with mild intellectual disability was conducted in a special education school in Sydney. This evaluation indicated improvements in children’s ability to report on feelings experienced, rating feeling intensity, using problem solving skills and increased opportunities to have empathy for one another (Wong & Costley, 2016). For example, one teacher reported that since completing WFP 1, she has had conversations with children in her class about starting high school. She reported having this discussion:

In this same study, it was reported that following delivery of WFP 1, recognising emotions in everyday life ‘went from zero knowledge to a large knowledge’. In particular, identifying emotions on the Feelings Strength Bar, the strength of the emotions, and how different emotions are experienced by different people was named as a great benefit of the Westmead Feelings Program 1. For example, one teacher reported:

If I asked everyone in my class, 'Why are you feeling sad?', they would all be able to tell me and say how they feel on the strength bar.
(Wong & Costley, 2016)

The Westmead Feelings Program teaches children on the autism spectrum emotional competence skills, which are the foundation for social skills, thus enabling children to have relationships with others and participate in the community.

The impact of the WFP 1 on social skills was evaluated in a study of 75 children in a treatment-versus-control-group study conducted in government schools across the state of New South Wales in Australia. For children on the autism spectrum with mild intellectual disability, WFP 1 improved overall social skills, assertion skills and autism spectrum symptoms, and reduced social relating problems (Ratcliffe, Wong, Dossetor, & Hayes, under review).

Teachers have reported on the social skills benefits of WFP 1 in a study conducted in a special education setting in Sydney (Wong & Costley, 2016). WFP 1 was reported to allow students to engage with each other, when they otherwise would not have chosen to spend time together.  For example:

There’s one group of students that are friends and the other two are not and don’t really socialise with them. It was really nice that they were all talking to each other about home and stuff like that.

Teachers also reported that WFP 1 provided opportunities for students to show empathy for their peers. For example, a teacher reported:

During one session, a student talked to the class about feeling really sad because his cat had died. It was nice for students to say to him, 'Oh, that was sad', and show a bit of empathy with their friends, because often you don’t really get a chance to talk about things like that.

The Westmead Feelings Program 1 teaches emotion regulation skills to help manage mental health problems. For example, in a study of WFP 1 in a special education school in Sydney, Australia for children on the autism spectrum with mild intellectual disability, one teacher reported on the benefits of using problem-solving and perspective-taking skills from the program.

We’ve got one boy in our class who does get angry a lot over minor things normally. I think the Westmead Feelings Program 1 helped him to think about how he could try something different next time [to manage his anger]. We spoke a lot about the problem-solving strategy. For example, I say, 'Okay, well, how can we solve this problem?' and once you start talking like that, because he’s done the Westmead Feelings Program 1 and knows the language, he says, 'Oh, okay…' That seems to help him to think about managing his anger. He might be a 3 on the angry strength bar and now he can think about how that might affect how someone else is feeling. So with him we could then say, 'Okay, well, you were feeling angry but because of the way you acted, now that person is feeling sad'.
(Wong & Costley, 2016).

More information on the research can be found here:

A full bibliography is supplied with the facilitator’s digital resources.

Professionals with a bachelor degree in Education are required to complete WFP Facilitator Certification via ACER online training or the Children’s Hospital at Westmead face-to-face certification.

Please note: Regardless of qualifications, it is recommended that all health professionals complete the online ACER WFP Facilitator Certification.

Parents or teachers will need to upload a transcript providing the following facilitator details: Facilitator’s name, Address, Registration number (if applicable) and Qualification

Professionals with a bachelor degree in Education are required to complete the WFP Facilitator Certification.

Regardless of qualifications, it is recommended that all health professionals complete the online ACER WFP Facilitator Certification.