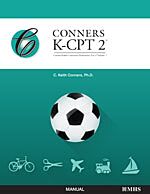 The 7.5 minute performance-based assessment uses pictures of objects (e.g. boat, soccer ball, train) that are familiar to young children. The child is asked to respond to targets (all objects except soccer ball) and refrain from responding to non-targets (soccer ball) that appear on the computer screen.

The Conners K–CPT 2 uses two Inter-Stimulus Intervals (ISIs) of 1.5 or 3 seconds to prevent the practice effects that can occur as respondents learn to predict and prepare for stimuli. Each Conners K–CPT 2 administration includes 5 blocks, each containing a 20-trial sub-block of 1.5-second ISIs and a 20-trial sub-block of 3-second ISIs (200-trial total).

The Conners K-CPT 2 uses both raw and standardised scores to determine not only the child’s performance overall, but also in four different aspects of attention: